A Dream About Unity

I was on what seemed to be the George Washington Bridge in New York, which I've been on several times and recognized by the fact it had two levels. I was on the lower level, which locals refer to as Martha. But I was not driving a car. 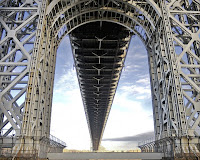 I was engaged in hand-to-hand combat in a one-on-one battle similar to what you might see in an Arnold Schwarzenegger sci-fi movie. My opponent and I struck at each other with super-human strength, even climbing the cables and rafters that held the bridge together and ripping off pieces of the bridge to strike each other and knock each other around.
Each blow required another part of the bridge and sent either me or my adversary hurling to a death-defying impact somewhere on the bridge. Though we seemed to kill each other over and over again, we kept coming back at each other with ever-increasing determination and ever more threatening assaults.

As we fought, gradually dismantling the bridge, each bloodied fall seemed all the more dangerous as the pavement below us began to sway and dangle with the crumbling structure. Yet we continued to fight even as the bridge dangled perilously, falling apart beneath us over an empty void.

I did not know the man with whom I struggled on the bridge; and yet I did know him. I somehow knew him to be, of all people, a theologian I'd never met but whom I'd written critically about. In the last moment of the dream, when I looked upon his face, which looked in no way familiar to me, I understood.

The next morning, I awoke with the understanding that it was not the GWB to NYC that I'd been on. I was on the bridge to eternity, Jesus Christ.

It was no accident that I was on the Martha level and that my fellow struggler descended from the upper level. I was engaged in Martha's cause and he was fighting on behalf of hierarchy. We both fought with unyielding passion and resilience. But meanwhile, the bridge had become unstable, unsafe, and a war zone unsuitable for fulfilling its intended design.

It troubles me that complementarians and egalitarians alike engage in attacks upon each other. We think we are defending truth but frequently we end up debilitating the body of Christ and her ability to offer others safe passage to God. I know that it is instinctual to defend oneself with like force when attacked and to go on the offensive when we perceive wrongs being done. I have done this, often as the aggressor. I admit there are times when I find it difficult to see an alternative. Yet I cannot help feeling very sorry. I wish we could find ways to better advance truth together.

I hope that in the year ahead complementarians and egalitarians will look for ways to engage in truly constructive conversation, not masking attacks in piously cordial or high-sounding dialog. Being truly constructive means more than just repairing those aspects of the bridge we have damaged. It means working together to heal one another and to offer the world the body of Christ as the true and stable bridge that Christ's body was meant to be.

Why should we continue to wound the one who was wounded for us? Construction and constructive dialog must begin with each of us. We cannot wait for the other side to begin what we must do ourselves.


© 1998 David R. Leigh. All rights reserved. Reprinted from RethinkingFaith.com by permission.
Posted by Dave Leigh at 1:54 AM