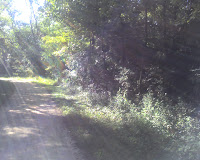 Eric wrestled with the so-called scientific evidences for the faith. He was better-read than I was on cutting-edge developments related to the evening's scientific presentation—and I have read my share! But it was clear to him, as it was to me, that the presentation of the evening did not give compelling reasons to embrace Yahweh, the Creator. I had to respect the fact that Eric was, by his own account, “struggling.”

It reminded me of how, years ago, I discovered my college roommate had been wrestling throughout the school year with whether or not to surrender to Christ. It had been happening under my nose and I hadn't seen it. I knew he asked me questions from time to time. But I hadn't picked up on the degree of his struggle. Then one night he shared with me how he'd even been to the brink of suicide at one point in his life over the matter. As he'd stood in his attic one night with a noose around his neck, Bill believed he'd seen a physical light where there was only enclosed darkness and no physical source for it. This compelled him to think in that moment that there must be a spiritual dimension to reality. The experience launched him on a search for God. And that search resulted in the conversation he and I were now having in our dorm room bunks.

I will never forget him saying: “I asked you once, 'Why do you believe?' and you gave me a list of intellectual, textbook answers. Well, that really turned me off,” he said. “Because I don't think any of that really has to do with what really made you believe. I think that stuff all came later. So tell me, why do you really believe?”


Why do you believe?
I thought about it and had to admit the “evidences” and “proofs” I'd given him really had little to do with what really moved me across the line of faith. While I'd found plausible answers to be comforting, they were not what really drew me into embracing the crucified and risen Jesus as my Lord and Savior. Rather, as I became engaged in searching the Bible and debating the questions as a skeptic, I'd fallen in love with someone—Jesus Christ.

As I admitted that to my roommate he exclaimed, “I wish you'd told me that in the first place. It makes so much more sense to me!” That night my roommate prayed with me to receive Christ and in that dorm room had his first experience of eternal life.

Years later I began asking people of faith what the final straw was that won them over. Sometimes it took me asking several times to get past the kind of pat answers my roommate rightly objected to—and which were typical of the coffee house presentation my seeker friend, Eric, found so disappointing. But once I could get them to sincerely think about what ultimately persuaded them, the answer to the question behind the question was always the same: “Factual” and “logical” arguments were not what finally won them; it was that they simply found themselves falling in love with Jesus. It was a sense or sudden awareness, an “ah ha!” encounter with the Savior that left them permanently changed.

Love is neither a logical nor illogical thing; it is supralogical. An encounter with Yahweh is all that and more; it is supernatural and spiritual. A matter of the heart and soul and one's entire being.

As one former atheist explained it, after reading the Gospel of John, he found himself irresistibly drawn to Jesus. As he read the teachings of Jesus, he found himself asking who could possibly not love the beauty of Jesus' message and Jesus' person. He had an inescapable feeling “like coming home,” he said.

There came a time in my life, years after the roommate discussion I just described, when I'd wandered far from God and came to see myself as an atheist. Although I was once known as a zealous Christian, I'd come upon difficult times that were brought on by my own bad choices and I foolishly abandoned my faith. Like Jonah who ran from God, I'd taken my own path away from him. Then one day I came upon a statement by a rabbi that set me on my path back to God: “The search of reason ends at the shore of the known; on the immense expanse beyond it only the sense of the ineffable can glide." (Abraham Joshua Heschel)

What's your biggest
obstacle to faith?


I could not deny that my soul was haunted by that sense of the ineffable. My rupture with God had turned the world into a cold, dark place, where it seemed to me someone had turned off the sound and color. That someone was me: my own stubborn choice of rebellion over surrender, denial over embrace, and a suppression of the truth that burgeoned within me like a boiling pot whose tight lid strained with the urge to blow.
What had happened? Where were all the apologetic arguments? I'd studied them all and even wrote my master's thesis on the topic. Ultimately the victory for me was not won in my mind, intellectual that I was, but in my heart. As Kierkegaard put it, sometimes “the heart has reasons that reason cannot comprehend.” Somehow, because my heart knew what my mind worked so feverishly to explain away, I found that deep down in the core of my being I knew I needed to surrender to God.
(to be continued)
Posted by Dave Leigh at 3:27 PM