How Divine Is Jesus? 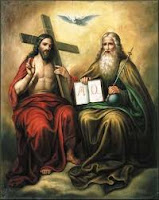 If you asked an Evangelical Christian, as late as the mid-1970s, if Jesus was equal to the Father in all respects, or if he was somehow less or subordinate to the Father in authority or rank, the unanimous reply would have been that each member of the Trinity is equal in all respects, and that any suggestion of hierarchy or subordination within the Trinity is an error likened to Arianism and Jehovah Witness teaching.

But something has happened under the "big tent" of Evangelicalism. And that answer is no longer unanimous.

I cut my theological teeth in the late 1970s studying the orthodox view of the Trinity as a reply to the cults. Resources like Walter Martin's Kingdom of the Cults, and the Spiritual Counterfeits Project Newsletter, helped me shape my understanding of Jesus' full and complete deity. My studies since then, as a theology student, pastor, and Christ-follower have deepened my love for the Trinity doctrine.

It seems that since the late 1970s a group of Christians with a social agenda aimed at imposing gender-based hierarchy in the family, church, and society have found it convenient and expeditious to harvest examples from church history that cast some doubt on the certainty we Evangelicals once had with regards to the total non-hierarchal and equal standings of each Person in the Trinity.

They call themselves complementarians. But their idea of complementarity is ruler/ruled, leader/led, dominate/submit. Their more honest and proper title might be hierarchists, patriarchalists, or subordinationists.

The idea of subordination within the Trinity is a controversy with roots in the early church and the writings of the church fathers. Yet very early it was rejected as unorthodox during the great Christological and Trinitarian debates. This rejection was articulated in some of the great ecumenical creeds before any schism occurred in the Church. Augustine and Athanasius strongly opposed any form of subordinationism, as did later confessions of the Protestant Reformation.

The Evangelical Dictionary of Theology defines subordinationism as:


"A doctrine that assigns an inferiority of being, status, or role to the Son or Holy Spirit within the Trinity." This doctrine was "condemned by numerous church councils," though it "has continued in one form or another throughout the history of the church."

The basis for opposing subordinationism is grounded in a truth expressed by the Council of Nicea in A.D. 325, that Jesus Christ is "from the essence of the Father, God from God, Light from Light, true God from true God, begotten not created, of the same essence as the Father." The council was adamant that "same" means "same," to the degree that the Nicene Creed anathematizes "those who say ... the Son of God is of a different nature or essence," allowing for no variation. Later councils clarified and explained that this sameness of nature means both the Father and the Son are equal in all respects and that there is no subordination within the Trinity. Consider:

"Thus there are not three gods, but three persons, consubstantial, coeternal; distinct with respect to hypostases, and with respect to order, the one preceding the other yet without any inequality. For according to the nature or essence they are so joined together that they are one God, and the divine nature is common to the Father, Son and Holy Spirit. (5.017)

"The Son of God, the second Person in the Trinity, being very and eternal God, of one substance, and equal with the Father...."

We believe that there is one living and true God, eternally existing in three persons, that these are equal in every divine perfection....

-- An Affirmation of Faith, Article 2 (Adopted by the Baptist General Conference in 1951)

A question naturally arises due to statements in the gospels that indicate that Jesus was in submission to the Father (cf Mt 11:27, Jn 5:26-27; 6:38; 8:28; 14:28). But such statements must be understood first as within the temporal context of Jesus' mission and his voluntary choice to humble and empty himself of divine rights in order to save humanity. In his exaltation, Jesus returned to the equality he'd known in eternity (cf Jn 1:1, 5:17-23; 10:15, 30; Tit 2:13; Ro 9:5; 1Jn 5:7). In Philippians 2:6-7 Paul marvels that although Jesus was equal to and the same as God, he voluntarily chose to submit himself to servitude. And the book of Hebrews tells us that Jesus' incarnation required him to learn obedience as a Son (5:8).

Second, passages that seem to indicate that Jesus was subordinate to the Father must be understood in the context of Jesus setting us an example to submit to one another. When Jesus knelt down and washed his disciples' feet he urged them to imitate him in serving and submitting to each other (Jn 13:13-17).

Third, we cannot forget that the Father also submitted to the Son, as when Jesus says in John 11:42 that God always hears him -- in the sense of granting his requests (cf 1Jn 5:15). So sure is Jesus of the Father's loyalty that he even promises his followers can pray in his name and the Father will grant the request (Jn 16:23-24). Likewise, we're told that the Father has committed all he has to the service of the Son (Mt 11:27). So complete was their mutual submission to one another that in John 17:10 Jesus describes his relationship to the Father by telling him, "All I have is yours, and all you have is mine."

It does not follow that because Jesus chose temporarily and voluntarily to be subordinated to the Father that this means a whole category of people must permanently and mandatorily submit to another class of people. And if the Father also submits to the Son, then it follows that submission between husband and wife, or man and woman should be mutual. This is how Paul could declare that for the baptized Christ-follower:


"There is neither Jew nor Gentile, neither slave nor free, neither male nor female, for you are all one in Christ Jesus." (Ga 3:28)

This mutual submission/mutual authority is beautifully illustrated in Paul's teaching on sex within marriage. Perhaps nothing better depicts the marriage relationship than the act that unites the two into one flesh. And it is here that Paul instructs spouses:

And so the orthodox and biblical view of the Trinity challenges us to understand submission in a new way, a way of true mutuality. Biblical submission is demonstrated for us by One who is equal to the One to whom he submitted (cf Phil 2:6-7). His example explains how it is we are to submit to one another (Eph 5:21) while none of us is authorized to hold authority over another (Mt 20:25-26; 1Pe 5:1-3).